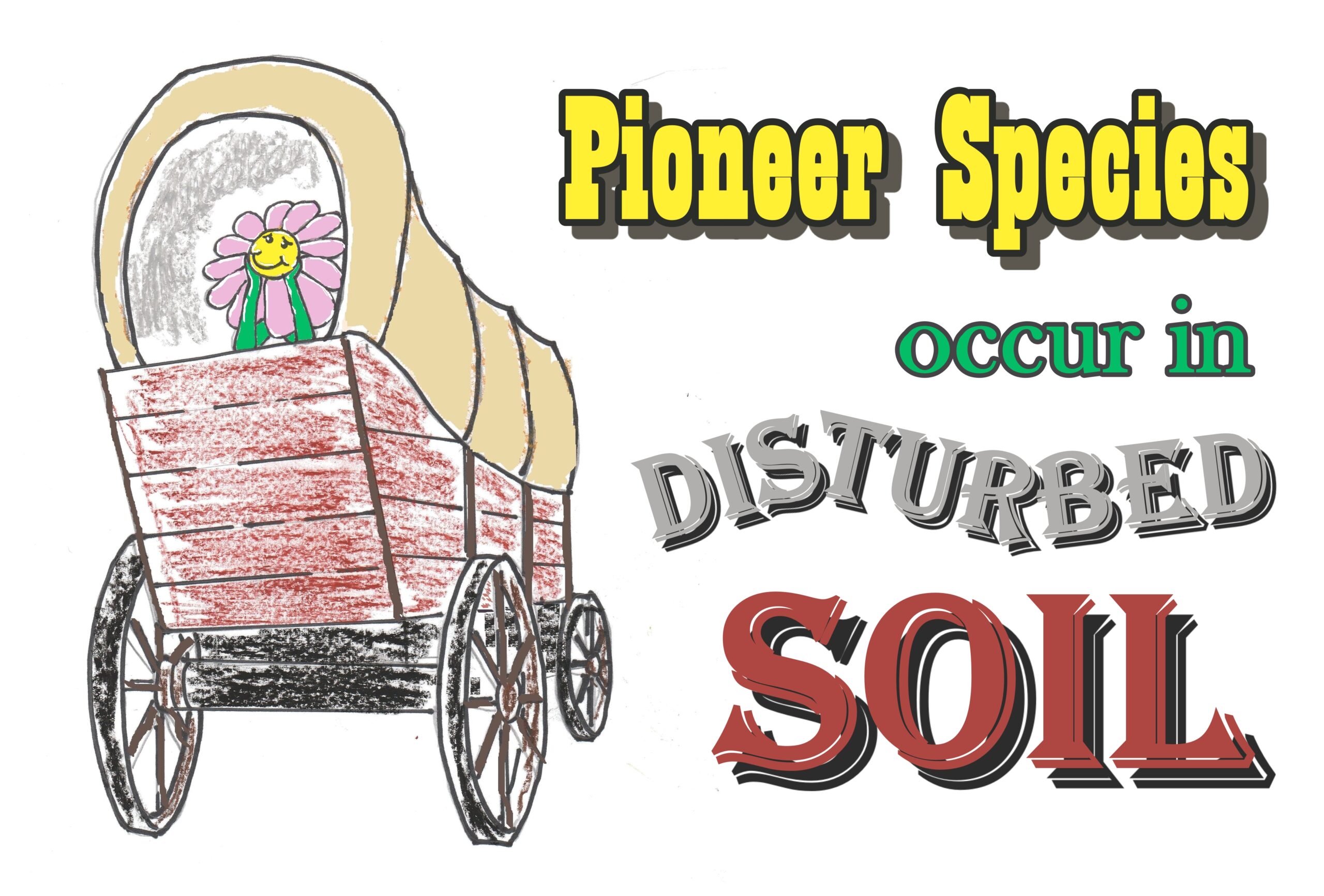 “Pioneer Species,” now doesn’t that sound very American? Don’t you picture flowers hitching a ride in a covered wagon going over the Oregon Trail? No? They don’t have thumbs! Sorry for the 6th-grade humor, but that visual was how the term struck me many, many, many years ago when I first heard it in my college ecology class. Now, a zillion years later, I come back across it reading a book, Garden Revolution (highly recommended) by Larry Weaner and Thomas Christopher in their discussion of cardinal flowers. Larry Weaner’s Garden Revolution and How Landscapes Can Be a Source of Environmental Change – Garden Collage Magazine

The thing about pioneer species is that they go through their life cycle quickly, a few years, then die. If you don’t know that about a plant, you can’t see why it failed; you think that either you killed it or that it can’t grow in your garden, but it can if you make a couple of adjustments to its growing conditions.

Pioneer species are the first plants to establish in an area after a disturbance. The disturbance may be a fire, a flood, a tree uprooting the soil as it falls, a tractor tilling the ground, or a gardener pulling weeds out by the roots and disturbing the soil. These things expose the seed bank already in the earth to the surface and sunlight they need to germinate. The seed bank is the accumulated seeds from wind, gravity, or animals carrying them. Once deposited on the surface, they get incorporated into the soil by being buried in the leaf litter that decomposes and becomes soil. There they sit until they have the ideal conditions for germination: moisture, soil, and sunlight. These seeds have long viability, some ten years or more.

The plants we often refer to as weeds are pioneer species. The classic one is dandelion (Taraxacum officinale), an invasive that we have no real hope of eliminating. You might also be familiar with fireweed (Chamerion angustifolium). It was the first plant to colonize Mt. Saint Helens after the eruption in 1980. In Great Britain, it is known as rosebay willowherb, where it quickly occupied the burned ground after the bombing of London in World War II. So, what does this have to do with your garden?

Pioneer species are wildflowers with seeds that have decent seed viability. You probably have some in your pollinator garden, but you don’t know which ones. So, you have to be on the lookout for the hints you get in the care guide of the plants. There are two primary hallmarks of these plants. If you want to have a continuous population of them in your garden, you can achieve it by being aware of them and adjusting their growing conditions. Otherwise, they end their life cycle and die off, and you don’t know why they died.

Let’s start with the cardinal flower (Lobelia cardinalis). It is a short-lived perennial lasting three to four years (first hallmark). It does not tolerate crowding; it is not aggressive. It can be crowded out (second hallmark). This makes sense if you think about its ecological function: to temporarily occupy an area until the next population of plants replaces it. A third characteristic specific to the cardinal flower is that it should not be mulched; it prefers bare ground. Mulching in the winter may cause the basal rosette to rot and prevents seed germination.

If you grow cardinal flowers (the hummingbirds will love you for it), you can perpetuate the patch following simple rules: keep the soil free of leaf litter and weeds, particularly in the spring when the seeds germinate. The plant grows its rosette the first year then blooms the second year on, so you will need to leap-frog generations. If you do not get seedlings the first year after the plant blooms, do the following: in the fall, take a few of the flower stalks once the seed pods are ripe, lay them on the bare soil between the parent plants, and leave them there all winter. You should have seedlings in the spring.

Other wildflowers that I have found to be pioneer species are:

This is not an exhaustive list; it is only those that I have come across in my gardening research. You may have none of these plants, one, or several and you may add to the list. Remember the two primary hallmarks of a pioneer: short-lived and does not tolerate competition. Knowing their needs, you can have these wildflowers for years to come.