Some of the newer or more casual members of the birding community may think of summer as the ‘slow’ time for birding. And in many ways it is. Spring migration is a done deal. If you so choose, you can hang up the binoculars, put the scope away after a good cleaning, and use your photography gear to capture more land-dwelling forms of life, such as your family, whom you may have neglected during the spring migration! So at the risk of being a spoiler for the summertime you thought you had “off”, I offer a few comments of interest about our summer avifauna in the Atlanta metro area.

Migration and Nesting
One point in this article will be the following: it is erroneous to think that “summer” is the time “after” spring migration and “before” fall migration. It is true that spring migration moves along at a pretty good clip. Birds are on the move to get to nesting grounds and get started with the breeding process. Fall migration, however is a much slower process and elongates from mid-summer to quite late in the calendar year. Yes: fall migration begins in the summer!

In the spring, migration is fast. Pardon my literary hyperbole, but don’t adjust your binoculars, or you might miss it! The glaring exception to this is the arrival dates of the first PURPLE MARTINS in Georgia of early February each year! Birders in Valdosta, Albany, and Bainbridge regularly document these first birds of “spring,” and they are then picked up in small numbers around the late part of February in the Atlanta area.

The survival drive here is for nesting territory, a place to set up shop and get down to the business of reproducing the species. Many arrivals may practice site fidelity or site tenacity. They return year after year to the same territory (but not to the same nest, excepting many raptors and water birds). Other species may be single and in search of a mate, and the largest percentage of them will be first year individuals never having nested before! So they need to find a place to set up and do this thing they know not of, but which will come as naturally to them as ingesting a caterpillar.

The real clarion call opening spring migration to me, though, is the early arrival song coming from deep in the edge underbrush, “chick-a-puh-weeeeoo-chick.” When you hear your first WHITE-EYED VIREO, you know it’s spring! And can the migrants be far behind?

The Zen of Birding: Observing Avian Life in Summer Birding
One of the most rewarding exercises in summer birding is found in just going outside and listening, watching, and noting all the bird behavior you can see. This kind of birding is in stark contrast to a typical birding outing of an organized group. In the latter, the activity is to observe birds, yes, but with the goal of seeing as many different species as possible in the allotted time. So the quest for numbers is the engine driving the birding. In the case of “listening, watching, and noting” birds, the engine is more passive. You are not trying to go to them as much as let them come to you. You are still and not
moving over, say, a 3-mile loop trail. You may be moving slowly, but you stop anytime there is anything of interest, and you watch it unfold, sometimes for 5 to 10 minutes.

How do you find a nest when they are so well camouflaged? You do not find it at all; you allow the birds to reveal it to you. To accomplish this, you have to linger, to be still, and allow the bird to inform you. You note an adult female SCARLET TANAGER in June, as I did in Grayson two summers ago. Is this a late migrant? No, it’s almost too late. But they’re quite uncommon nesters in Gwinnett County, perhaps becoming more common. Why is it moving about in the trees across and back over the same area repeatedly? Wait. She just grabbed a caterpillar. But she’s not consuming it. She’s just moving
from twig to twig, caterpillar dangling. That’s nesting behavior! As she rose to the canopy level, where the nest was, she would disappear into a covering of leaves, then re-emerge, caterpillar removed from her mouth. I never found the nest per se that day, but by being still and watching the birds at work, I learned a lot, and let them show me the area of the nest, without seeing the nest itself. Time elapsed: about 20 minutes. I only saw one bird, but after seeing it I went further – I watched the bird. I allowed it to tell me about its mission, its task at hand. I left feeling informed and curiously refreshed.

At an even more mundane level, consider the BLUE JAY – raucous call, messy around feeders, an avian bully of sorts, chasing smaller species off the platform and slinging seeds right and left. In their defense, however, let me say that they are the first bird in a mixed flock to signal a cacophonous scream as an alarm call if a raptor is seen gliding into the wooded area. But this one day I looked up and saw a jay in my back yard that was perched, still, and quiet. Had I just entered an alternate universe? No, there’s my wife, and there are all my dogs, acting normally. So what’s with this jay? I decided to switch into my mindfulness mode, and so having seen him, I went further and just watched 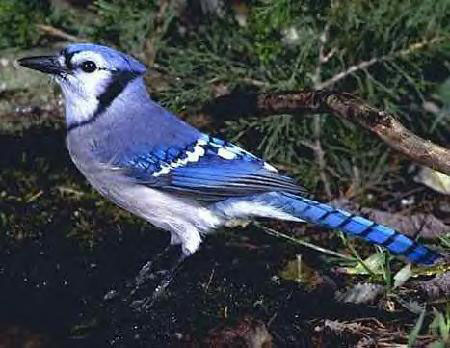 him. I slowly went into a seated position on a bench (no, I did not fold my legs into a half-lotus). The jay seemed to be watching me back, but I anthropomorphize too much. Just watch him, Joel. After a few minutes, I decided I was too close, almost in trance with this individual. So quietly I rose and took a few steps back, like in the video when the cameral zooms out to give the viewer a wider field of view. That was the right thing to do, for only then did I notice at about the same level as the quiet jay, and on a parallel branch in the next tree, a mother on nest! The nest was built right into the crotch of the branch with the tree, covering the branch collar. Two quiet blue jays, following their genes to do what all birds do. By being still, I learned some jay behavior that gave me a different perspective on this species me, these types of  observations are the true core of birding, and are the way we push through the threshold of current knowledge to learn new information about the avian world. Yes, I once was a compulsive counter, a lister, and a bird chaser. I will still chase a state life bird. I drove to Valdosta last spring to see the first VIRGINIA WARBLER in Georgia, and only the second east of the Mississippi. But the real challenge is to be still and listen, watch, and observe. I think that summer is well adapted
to this kind of birding, and I strongly invite the reader to do more of this. It will also keep you focused, slow your heart rate, and remind you whence you came to emerge as a man or woman on this earth.

Post-Breeding Dispersal
If one throws in the phenomenon known as post-breeding dispersal, it is possible to make a case that new post-breeding birds start appearing in June, though it is not migration in the strict sense. After a successful breeding operation, both the fledged nestlings and the parents hang out in the territory of the nest for a few days up to a couple of weeks. Though the nest itself is abandoned as the young fledge, about one surviving nestling per day, it makes sense for the family to remain in the area of the nest for several days. The parents are feeding the young, and teaching them the art of foraging (which
is also genetically instilled in the juvenile brain).

But then they began to wander. They move about alone, or in pairs or triads, avian nomads gradually ending up far away from the nesting territory. So in the metro area one may observe birds in June and July that are usually not found as nesting birds in the area. Characteristic of this would be the appearance in mid- to late June of some juvenile and adult warblers who don’t nest any further south than Dawson County, and in large numbers only in the north Georgia mountains. This is all part of the exciting challenge of locating birds in this phase of post-breeding dispersal.

Migratory Restlessness: Fall Migration in the Summer
Then, a few days to a few weeks later, the shortening days following the summer solstice slowly trigger an urge these marvelously tuned flying machines cannot resist. The Germans call it zugunruhe, “migratory restlessness.” This endogenous response is hard-wired so that they can move to where the days are still long in order to seek and find sufficient food. The irresistible urge comes fairly soon after post-breeding dispersal. It begins with only a few species first, and then follows with wave after wave of various species in mixed flocks through the end of October.

One of the first evidences of true early fall migration are our RUBY-THROATED HUMMINGBIRDS. A frequent complaint of back-yard birders from April on is, “Where are all the hummingbirds? I’ve got two feeders out and have only seen a couple of hummers all spring!” Think about it. What are Ruby-throats doing at this time? They are broken off into well-defended territories, and are too busy with their brief nesting window to be bouncing about exploring for your feeders. Now if there’s a nesting pair whose territory overlaps your yard, then you’ll see them daily, as they forage and find your feeders (or know their location from previous years). Then suddenly, where there were only a small number of individuals at a given feeder daily, up to a dozen or so adult males, with their iridescent wine red gorgets, appear as early as the first flocks around July 1. Why so many males? Where are the females and juveniles? The males of this species migrate first after the initial days following the fledging of the brood. The adult females are left with the juveniles, and they gradually disperse to await the urge to migrate. (Permission is granted the female readers at this point to utter a grunt of disgust, with the
word “Men!” expelled in a short burst.) 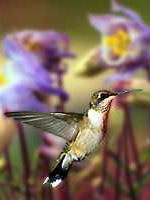 The beautiful but seriously declining CERULEAN WARBLER is another early migrant associated in this area with an early to mid-August wave leveling off into September. One summer I had 3 in my back yard on August 15. After this time, reports filter in of other early warbler species: BLACKTHROATED GREEN WARBLER, NORTHERN PARULA WARBLER, BLACK-THROATED BLUE WARBLER, AMERICAN REDSTART, WORM-EATING WARBLER, and so on.

One of the best “migrant traps’ in the Southeastern U.S. is located right here in the Atlanta area, and that is Kennesaw Mountain. Going there all through the month of August is sure to reward the observer with up to a dozen species of warbler on any given day, but especially after a southerly to southeasterly front has moved through. These fronts enable nighttime migrants to get a relatively effortless trip, and Kennesaw Mountain appears to them as a forested island of food
sources amid the alien and foreboding concrete jungle surrounding it.