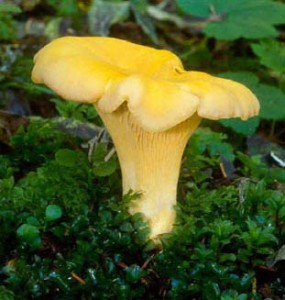 Wild chanterelles are truly a beautiful sight to see in early June until early July here in the Atlanta area. Not only do they add color to the forests and woodlands but they are also a gourmet’s delight.

I recently meet a young couple, however, that became violently ill after eating what they believed were wild chanterelles. Unfortunately, none of the “wild chanterelles” were kept for identification purposes. When picking and eating wild mushrooms of any kind, always save a few for later
identification in case there is a toxic reaction. The following describes a number of mushroom species that could be mistake for chanterelles. I do not recommend eating any wild mushroom unless you personally can identify them.

There may be as many common names for Cantharellus cibarius as for Boletus edulis. From the French we have chanterelle and from the German we have Pfifferling. Chanterelles vary in size, stature, color, and fruiting habits but are usually defined by its yellow-orange cap and “primitive” decurrent, sometimes forked, gills. There are a plethora of look-a-likes that include the false chanterelle (Hygrophoropsis aurantiaca), waxy caps
(Hygrocybe flavescens has adnexed to sinuate gills), Lueucopaxillus albissimus, Gymnopilus spectabilis, Hypomyces lactifluorum (the Lobster Mushroom is parasitic on Lactarius and Russula), and the Jack O’ Lantern (Omphalotus illudens). Aside from the many variations within C. cibarius, there is C. formosus that is an eastern conifer lover with a convex, yellow to brownish cap and pinkish gills and is edible. Cibarius simply means food.

The False Chanterelle is considered a “look-a-like” of Cantharellus cibarius because of its blunt, forked gills and similar color. Hygrophoropsis aurantiaca typically has bright orange, decurrent, dichotomously forked gills and a white spore print. Dichotomously fork gills are a type of branching in which the gills divide into two equal parts, so that it produces a fork of approximately equal branches more or less uniformly distributed under the cap. This is not true for C. cibarius that have forked “gills” randomly distributed around the underside of the cap. It is said that true chanterelles have “false” gills and false chanterelle have “true” gills. Aurantiaca means “orange-colored.”

Cap: Convex at first, becoming flat to depressed in the center, or shallow vase-shaped with an incurved margin that is seldom wavy; orange to orange-brown or sometimes yellow-brown; surface smooth or downy, dry. 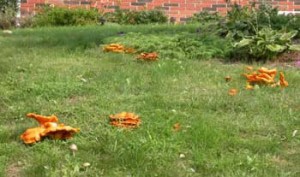 Common Name: Jack O’ Lantern:
The Jack O’ Lantern sometimes occurs in large clusters in lawns and grassy places from the roots of trees whose remnants are no longer visible. It can be distinguished from Chanterelles since it has sharp-edge true gills rather than blunt gill-like veins beneath the cap. Chanterelles rarely occur in clusters of more than 2 or 3 fruiting bodies and are egg-yolk yellow. The gills of fresh Jack O’ Lanterns are luminescence and will glow
in the dark with an eerie greenish color. Illudens means emitting light.

The Jack O’ Lantern also occurs at the base of dying or dead trees and tree stumps. 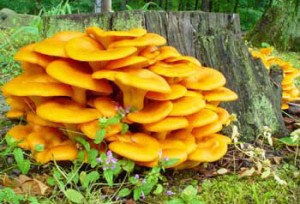 Cap Width: Up to 7 inches
Stalk Height: Up to 8 inches
Cap: Convex at first, becoming flattened or shallowly depressed with age, with or without an umbo, margin incurved when young later expanding and becoming wavy; pumpkin colored from bright orange to yellow-orange becoming brownish with age; surface smooth.
Flesh: White to yellowish
Gills: Decurrent, close to moderately well spaced; colored like the cap; luminescent.
Stalk: Nearly equal, usually narrower at base; solid; central to eccentric; colored like the cap or paler; surface smooth.
Spore Color: Cream to pale yellowish
Habitat: Typically growing in large clusters, often with multiple stalk bases originating from one point; on or around well-decayed stumps (oak)

or from decaying underground roots; saprobic; summer to fall.
Edibility: Poisonous. Symptoms manifest themselves 15-30 minutes after ingestion and are focused on the involuntary nervous system. Profuse sweating, excessive salivation, tears, plus severe vomiting and diarrhea are typical symptoms due to the toxin muscarine. The victim usually recovers within 24 hours but in severe cases, death may result from respiratory failure.

The photograph to the right shows the sharp-edge gill structure of the Jack O’ Lantern.