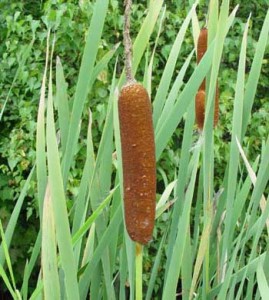 You don’t have to travel to the steppes of Russia to find this wild edible plant. “Cossack asparagus” is another name for the common cattail, sometimes called bulrush. There are probably very few people who don’t know what a cattail is or what it looks like. When mature, the cattail is
easily recognized by its brown “hot dog on a stick” appearance.

Technically, male and female cattail blossoms are flowers, but extremely small. When they open, the tiny female flowers are greenish but before long they turn into the familiar brown cylinder. Male flowers don’t hang around very long. They grow on a yellow spike that juts out of the top of the brown cylinder, and when their pollen is ripe, it drops on the female flowers below. Then the male flowers fall off, leaving the familiar hot dog-on-a-stick.

There are even fewer people who know that the common cattail has many edible and medicinal parts. Almost every edible part can be harvested from late spring, through summer, and into early fall. Euell Gibbons in his book Stalking the Wild Asparagus called it the “Supermarket of the  Swamps.” The cattail, a member of the grass family, is so versatile it can be used raw in salads, as a cooked vegetable, ground into flour, pickled, and as a substitute for potatoes.

Dense stands of cattails are found from the artic to the tropics in shallow water at the low end of farm fields; fo llow railroad tracks, near ponds, lakes, and marshlands. In North America, it is a single genus with three species, all of which are edible: the Common Cattail (Typha latifolia), the Dominican or Southern Cattail (Typha domingensis), and the non-native Narrowleaf Cattail (Typha augustifolia). If you plan on gathering some cattails, put your boots on since it’s a muddy and messy business. You don’t need to worry about harming the plant by pulling it up since the  colony grows from a system of branching, underground rhizomes. If you wish to do some culinary experiments with cattails, avoid those growing in areas exposed to pollution from traffic or chemical runoff.

Young cattail shoots resemble the non-poisonous sweet flag (Acorus calamus), the poisonous wild flag (Iris spp.), and the poisonous daffodil (Narcissus spp.). They are similar in appearance to the cattail but the distinctive fruiting spikes are absent. None of the look-a-likes grow more than a couple of feet tall, so by mid-spring, the much larger cattail becomes unmistakable. 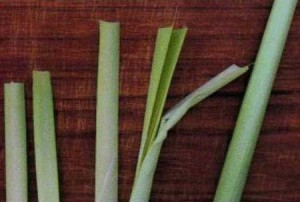 In the early spring when the plants are 4 to 16 inches tall, young shoots (rounded flower stems, not the leaves) can be easily pulled from the rootstocks. Peeling off the leaves reveals a tender white core. These can be eaten raw or in a salad and taste like mild, raw cucumbers. They can also be sliced and sautéed in a little butter for a delightful side dish. The young shoots can be gathered, peeled, boiled, and pickled in hot vinegar. They may also be blanched and frozen for use during the winter. Be aware that while collecting the shoots your hands will end up with a sticky,
mucilaginous jelly. The Indians applied this jelly to wounds, sores, boils, external inflammation, and to soothe pain.

As the stalks reach about 2 to 3 feet tall, they can still be harvested and peeled to remove the tough, woody outer layer. When the peeled, white inner stalks are steamed, they taste similar to cabbage.The Russians have a fondness for the steamed stalks thus the name “Cossack asparagus.” The shoots provide beta-carotene, niacin, riboflavin, thiamin, potassium, phosphorus, and vitamin C.

In late spring and early summer, the young bloom spikes (flowers) emerge that will later form the brown, fuzzy cattail head, popular in dried flower arrangements. The young bloom spikes, found in the center of the plant, form little enclosed cylindrical packages that can be detected only when you’re close to the plant. The young blooms, about 8 to 12 inches long, are about the diameter of your little finger, and enclosed in a papery sheath. Peel back the papery sheath (leaves), as you would shuck corn, and you will find both the male portion at the tip and the female portion lower down. These “cob” spikes inside the papery sheath are what you eat.

You want to eat the male portions of the immature, green, flower head. You can discard the small female portion. Steam these spikes about 7-10 minutes, roll in butter and salt, and nibble the buds off the hard central core. The taste is reminiscent of corn (a distant relative) and asparagus. The flowers have a very dry texture and are almost unpalatable when cold. After cooking, it’s easier to shave the flower buds off the woody core and add some salt and melted butter to keep them warm. I don’t know how to describe the taste except that it’s good. It is a good vegetarian source of protein, unsaturated fat, and calories and also contains beta-carotene and minerals.

The rootstocks or rhizomes are typically ¼ to 1-1/4 inches in diameter and up to 27 inches long. They grow 3 to 8 inches below the soil surface. After digging them, you’ll need to peel the outer spongy layer away to find the white inner core. The edible core is very fibrous and filled with a starchy material. Cut the core into 4-inch pieces and allow them to dry for a day or two. You can then rub off enough “cattail flour” to add it to a biscuit mix for flavor. Unless you’re starving, I can’t recommend going to the time and trouble of harvesting, peeling, drying, and processing the rhizomes. 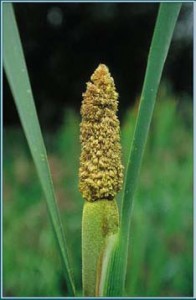 Just before the summer solstice, the male blossoms, located above the brown female bloom spike, ripen and produce significant quantities of bright yellow pollen as fine as talcum powder. Cattail pollen beats bee pollen not only in price but also freshness and nutrition. This corn flavored pollen is easily gathered by wading through the cattail marshes and gently bending each bloom spike over and dusting it into a large paper bag or a plastic baggy. Do this during a calm, dry day. Gather only enough fresh pollen for immediate use (about 3-4 cups). Use it as a flour extender for biscuits, breads, and cakes. Since the pollen doesn’t rise, a rule of thumb is to mix it with about two or three times the amount of flour in a given recipe. Follow the recipe for your favorite pancake mix, except replace one-third of the pancake flour with the cattail pollen. The pancakes will have a golden color when cooked and an excellent flavor. You can also eat the pollen raw, sprinkled on yogurt, oatmeal, and salads.

One of the uses for cattail leaves is rush seating. The rushes are usually gathered in midsummer when the plants are fully mature, and carefully dried in the open air to prevent molding. They can then be bundled and stored. The dried rushes need to be soaked before using to make them pliable. Archeologists have excavated cattail mats over 10,000 years old from a Nevada cave. The Internet has plenty of information on rush weaving.