La Rochefoucauld said that “To eat is a necessity, but to eat intelligently is an art.” Nearly everybody in his or her life has had at least a small desire to get out of the fast lane and resort back to a simpler way of life. Not the least of these instincts are the pleasure of eating foods provided by nature and becoming, at least for a day, independent of the supermarkets. Edible wild plants and mushrooms grow in our woodlands, marshes, fields, pastures, and in our own landscapes. Some of the best tasting and healthy foods are available “free” for the eating, provided you know which plants and mushrooms are edible!

One of our early cave dwelling ancestors encountered a pretty cluster of mushrooms on the ground and asked:

An intrepid ancestor ate it and promptly died. Fear of poisonous plants and mushrooms is traceable to stories like this.

The term “POISONOUS” used in this article does not imply that the plants or mushrooms are deadly. Plant and mushroom poisoning can vary from dermatitis to a minor stomach upset, hallucinogenic ‘trips’, or a rather painful, protracted death. There are a number of variables that determine how severe the poisoning symptoms maybe, such as the plant or mushroom species and the person’s age, weight, and health status in relationship to the quantity of the plant or mushroom ingested. Also impacting the severity of the symptoms is the form of plant or mushroom at the time of ingestion (i.e., cooked versus raw, fresh versus aging, etc.).

Don’t be paranoid. Build your knowledge of plants and mushrooms and whether or not they are toxic or edible. Garden centers, nurseries, florists, and Cooperative Extension can assist in plant identification. Plant samples taken in for identification purposes should be fresh and include leaves, stem, flowers, and fruit. For mushrooms, take in the entire fruiting body from cap to base (the part in the ground).

POISONOUS PLANTS
Most of us are familiar with common poisonous plants that cause skin irritation such as Poison Ivy or Poison Oak. More than 100 species of common landscape plants in Georgia, however, can cause illness or death. Many ornamental plants found in the landscape were selected from wild populations due to their foliage, flowers, and scent. In many cases, little or no consideration was given to plant toxicity. Landscape plant toxicity is good in once sense since many herbivores, such as deer and rabbits, and insects, like Japanese beetles, tend to avoid them.

In the vegetable garden, many plants also contain toxins. For example, the stems and leaves of tomatoes, peppers, eggplant, and potatoes (members of the Nightshade family) contain alkaloid toxins that can cause liver damage. The edible fruits of tomatoes, peppers, and eggplants and tubers of potatoes do not contain toxic levels of these alkaloids. Potatoes, however, may turn green in response to light and become toxic. Another member of the Nightshade family, tobacco contains the alkaloid nicotine.

Most adults would not knowingly eat leaves, stems, roots, or fruits from an unknown plant in our pastures, lawns, or forests. This does not apply to our children, livestock, or pets.

Children love plants and love to put things into their mouth just for a taste. Teach them not to eat any plant unless they have permission from a knowledgeable adult and don’t decorate the table with poisonous plants.

Since pets and livestock can’t read, always provide them with plenty of water and palatable feed. Walk the lawn, pasture, and forest to identify potentially poisonous plants. Your local veterinarian can help you learn about local plants that may harm your pets or livestock.

The physiological effects that generally categorize plant poisonings are: 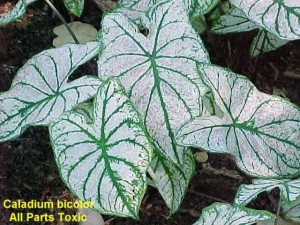 For a complete listing of Georgia’s poisonous plants including toxic plant parts and symptoms, go to UGA’s Horticultural Fact Sheet “Poisonous Plants in the Landscape” written by Robert Westerfield and Gary Wade at: pubs.caes.uga.edu/caespubs/horticulture/h-00-056.pdf .

POISONOUS MUSHROOMS
Wild mushrooms are found in all parts of the Georgia landscape: pastures, lawns, forests, and organic mulch of all types. Also on stumps, living trees, and in the home, particularly in basements, plaster board walls, and flower pots. Mushrooms can be found throughout the year, mostly early spring through the fall, if temperature and moisture are suitable for their fruiting.

Mushroom poisoning is caused by the consumption of raw or cooked fruiting bodies (mushrooms or toadstools). The term toadstool is from the German Todesstuhl or Death Stool and is generally applied to poisonous mushrooms. For individuals, who are not expert at mushroom identification, there are no general rules to distinguish between edible mushrooms and poisonous toadstools. Old wives tales notwithstanding, toxic mushrooms cannot be made nontoxic by cooking, canning, freezing, or any other means of processing. The only way to avoid poisoning is to avoid ingesting toxic species.

Mushroom poisonings in the United States commonly occur among:

Accurate figures on the relative frequency of mushroom poisonings are difficult to obtain. The Centers for Disease Control in Atlanta lists 44 cases reported between 1976 and 1981. The number of unreported cases is unknown. Poisonings tend to be grouped in the spring and fall when most mushrooms are in the fruiting stage. As Americans become more adventurous in their mushroom collection and consumption, poisonings are likely to increase.

About 98% of all “wild” mushrooms are not poisonous but about 1% are dangerous (1% are woody or too small to attract any interest). Wild mushrooms should not be eaten unless YOU personally can identify them as safe. Do not rely on the identification any wild mushroom by a neighbor or “expert” amateur mushroom hunter. Remember that “specialists” or “experts” have also been poisoned.

The physiological effects that generally categorize mushroom poisonings are: 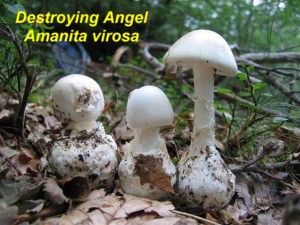 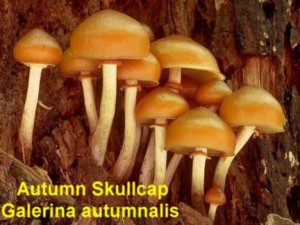 Georgia is home to several species of mushrooms that could cause death if only a single mushroom is eaten. Two such deadly species are the Destroying Angel, Amanita virosa, and the Autumn Skullcap, Galerina autumnalis. Some mushrooms that are not toxic under normal conditions can have a toxic reaction if consumed with alcohol.

IN CASE OF A POISON EMERGENCY
In the event of a poison emergency call the Georgia Poison Center any time, 24 hours a day, 7 days a week:
In Metro-Atlanta Call: 404-616-9000
Outside of Metro-Atlanta Call: 1-800-282-5846
Teletype for the deaf and hearing impaired only: TTD 404-616-2987
If the poisoning occurs and the person is having trouble breathing, experiencing seizures, or will not wake up, Call 911 immediately.
Be prepared to give the attending physician:

If hospitalization is required, take a portion of the suspect plant or mushroom with you for positive identification