– The Bugwood Network, The University of Georgia

Cogongrass (Imperata cylindrical) is a perennial colony-forming grass that grows up to 3 feet tall. Leaves have an off-center and whitish midrib and rough edges. Sharp, branched, white rhizomes help identify this plant. It is best identified by the large fuzzy panicle of flowers and seeds,  giving the plant a cottony or silky look. Flowering occurs in late spring.

A native to Southeast Asia, it was first introduced into the southeastern Untied States in the early 1900’s. It was initially 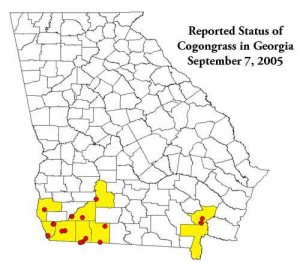 planted for forage and erosion control; however it is unpalatable for livestock and not well suited for erosion control due to its aggressive behavior. Currently it is found in the southeastern United States and is sparse in South Georgia.

It is an extremely aggressive invader with the capability to invade a range of sites. It forms dense mats that exclude all other vegetation, leading to its inclusion on the federal noxious weed list. It spreads both by rhizomes and winddispersed seeds. Infestations often occur in circular patterns.
It is very flammable and creates fire hazards, especially in winter.

Congongrass is a federal noxious weed and any occurrence should be promptly reported. The recommended herbicides for control are a foliar spray of Arsenal AC, Glyphosate, or a combination of both.