FUNGUS
Fungi are neither plant nor animals but a very different type of organism. They do not contain chlorophyll or the molecule used in   photosynthesis to produce sugars with the help of sunlight. They do not have a root system like that found in trees, shrubs, flowers, and grasses. As a result, they cannot manufacture their own food, but, do feed themselves by digesting organic matter.

Mushroom hunters are familiar with many of the mycorrhizal fungi characteristics of the north temperate forests; especially basidiomycetes such as gilled mushrooms, chanterelles, boletes, corals, puffballs, and jelly fungi. Mycorrhizas in these forests have a small percentage of ascomycetes such as morels, truffles, cup fungi, and elfin saddles. Lesser known of the more common mycorrhizal fungi are the zygomycetes, relatives of black bread mold.

Fungi can be divided into three basic categories based on their relationship to their environment:

MYCORRHIZAL FUNGI
In 1885, A. B. Frank coined the word mycorrhiza by combining the classic Greek word for fungus (=mykes) root (=rhiza). Mycorrhizas are  ancient. Fossil records show that roots evolved alongside fungal partners about 350 to 500 million years ago. It is believed that this “mutualistic  association” was crucial in assisting plants evolve and colonize the land millions of years ago.

While many species of fungus do not form a symbiotic relationship, the vast majority of land plants, between 80% and 90%, have mycorrhizas.

In this symbiotic relationship, plants photosynthesize providing carbon and other vital substances to the fungi. In return, the fungi provide the plant with mineral nutrients, such as phosphorus, nitrogen, and extra water that they take up from the soil.

Plants, being capable of producing their own food can potential survive without the fungus. Fungi, however, are often completely dependent on the live plant for sustenance and, thus, it could be considered a parasite of the plant.

For example, orchids are very dependent on mycorrhizas for all or part of their life cycle. They cannot germinate fully without being infected by a fungus. These plants have thousands of tiny seeds that contain no food reserves for growth (unlike nuts). They therefore depend on help from  fungi in order to obtain enough food to survive. The fungi perish in the course of the orchid’s development and are absorbed by the orchids. If this host specific action does not take place, the fungus spreads and becomes parasitic. This is why only a small percentage of seedlings develop in many orchid species.

Dwarf Rattlesnake Plantain Orchid (Goodyera repens) is dependent on mycorrhizas (Rhizoctonia lanuginose) that live within the plant’s roots and are given protection by the plant. Before the orchid has begun to photosynthesize, the fungus provides it with carbon. When the plant is mature, the mycorrhiza will mainly provide the nutrients.

There are over 400 species of plants that lack chlorophyll. These achlorophyllous plants are found in many families and the majority relies on
fungal associates for the carbohydrates that these plants would produce through photosynthesis. In some cases an entire plant family is  achlorophyllous like the Indian Pipe (Monotropaceae spp.) while in others (Orchidaceae spp.) only certain genera lack chlorophyll.

MUTUAL BENEFITS OF MYCORRHIZAL FUNGI AND PLANTS
If you have ever admired the beauty of an orchid, eaten some freshly picked blueberries, or sat in the shade of a magnificent oak tree, you have benefited from the underground world of mycorrhizal fungi.

Many botanists and ecologists are coming to the realization that lowly fungi play a major role in the ecosystem. Fungi are the cornerstones of a woodland ecosystem and yet their impact is often overlooked.

The sketch reveals something of the world beneath the surface of the forest floor. 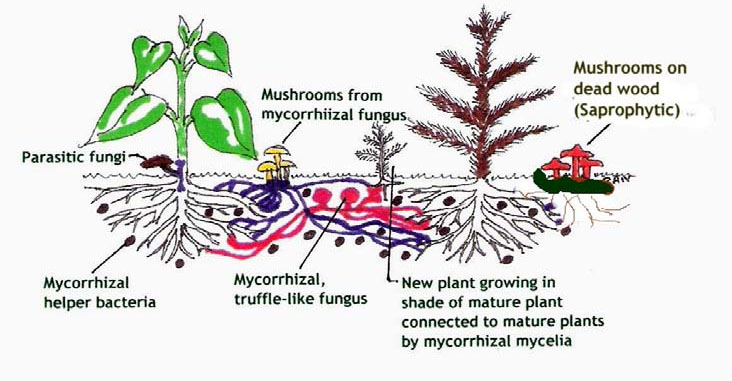 There are parasitic fungi that have their hyphae penetrating the roots of the plant resulting in some mushrooms at the base of the trunk of a small tree.

This latter plant-mycelium-plant connection allows the carbohydrates produced by one plant to move through the attached mycelium to another plant. As shown in the sketch, a seedling growing in heavy shade benefits from the photosynthesizing activities of another plant growing under more favorable conditions.

The formation of the mycelium-root connection is not just a simple matter of fungus meets plant and fungus hooks onto plant. There are soil bacteria, known as mycorrhizal helper bacteria, which promote the formation of mycorrhizas.

Plants allow and most require mycorrhizal fungi to colonize their roots. In this mutually beneficial relationship, the hyphae of the fungus greatly increases the surface area that is open to nutrient and water absorption, maximizing the plants access to these essential compounds and elements. In return the plant supplies the fungus with carbohydrates for use as energy. The fungi also can help the plants contend with summer droughts and protect them from pathogens, like nematodes, that attack their roots.

Phosphorus is a relatively immobile element in the soil. Mycorrhizas are able to absorb large amounts of phosphorus by decomposing its organic sources. The mycorrhiza hyphae also maximize the surface area available to access phosphorus. Research indicates that mycorrhizas increase the phosphorus concentration in host plants by up to 40% compared to non-mycorrhizal plants.

DIFFERENT TYPES OF MYCORRHIZAS
There are a number of different kinds of mycorrhizas but those that most mushroom hunters are interested in are the Ectomycorrhizas (mushrooms and truffles).

Ectomycorrhizas: Ectomycorrhizas (“ecto” = outside) is the fungus growing on the surface of the feeder roots of plants and can usually be distinguished with the naked eye. Their name comes from a well-developed furry growth called the fungal hyphae (= mantle or sheath) that that covers the outside of the fine root tips (periradical phase). Many hyphae emanate from the mantle into the soil to form the extraradical (radical = root) phase. Sporocarps develop from the extraradical mycelium. Sporocarps are the fruiting body of a fungus that produces and releases the
reproductive spores. Large sporocarps found above the ground are called mushrooms and those below the ground are called truffles.

The fruiting bodies of truffles, being completely submerged beneath the soil, do not forcibly discharge their spores and rely upon underground vectors and mammals, such as squirrels, chipmunks, and voles, for spore dispersal. These genera are often found living with the roots of oak,  hazel, sweet chestnut, pecan, and a few other trees.

Ectomycorrhizas are composed of at least 65 fungal genera; most are in the phylum Basidiomycota, although some are Ascomycota. Well known genera in the Basidiomycota include Amanita and in the Ascomycota, Tuber (truffle) and Morchella (morels).

Ectomycorrhizas colonize about 3% of all seed plants (Angiosperms and Gymnosperms) or about 140 genera including but not limited to Pinus (pine), Picea (spruce), Eucalyptus, Fagus (beech), Betula (birch), and Quercus (oak).

The ectomycorrhizas display varying degrees of host specificity. Some fungal species colonize many plant species and some fungal species colonize the same individual plant. There is some evidence that non-native ectomycorrhizal fungi are “invasive” and are becoming associated with plants with which they have never had an association with in the past.

Ectendomycorrhizas: This is a subgroup of the Ectomycorrhizas. These exist with or without a mantle, with a Hartig net, and cellular penetration by hyphal coils. They are restricted mostly to the plant families Pinus (pine). Most place these fungi in the phylum Ascomycota.
Endomycorrhizas: Endomycorrhizas (“endo” = inside) do not form a mantle around the fine tips and thus do not have a periradical phase. They often have a well-developed extraradical phase as a mycelial network throughout the soil. These do not form complex sporocarps (mushrooms and truffles) and instead reproduce by means of large spores (10 to 50 times greater than mushroom spores) that remain in and move with the soil.

The Endomycorrhizal group has been essentially dismantled and specific types are now recognized. These are:

The mycorrhizas associated with order Ericales are:
Ericoid Mycorrhizas:
Ericoid mycorrhizas are somewhat similar VAM, in that the fungus invades the host cells, but affect only plants in the family Ericaceae (heather, rhododendron, and blueberry family).

Monotropoid mycorrhizas: These may have a mantle, Hartig net and cellular penetration. They are found in Montropa species (Indian pipe).

MYCORRHIZAL FUNGI AND HOST PLANTS
Of the roughly 70,000 fungi species and 300,000 plant species, only a very small percentage plants can or must enter into mycorrhizal relationships. There are about 5,000 types of ectomycorrhizal species but only about 150 endomycorrhizal species.

A summary of the various plants and their predominant mycorrhizas are given at the end of the newsletter.