Mycorrhizal (pronounced my-core-RYE-zall) fungi have a mutualistic relationship with the plant roots that they colonize. The tiny strands of the fungi or mycelia extend far into the soil and become extensions of the plant’s root system. The mycelia increase the surface absorbing area of the roots by one to two orders of magnitude (10 to 100 times) thereby greatly increasing the plants ability to utilize soil nutrients and water absorption. Several miles of mycelium can be found in a thimble full of soil. According to Michael Miller, senior soil scientist at the U.S. Department of Energy’s Argonne National Laboratory, “Basically, 90 percent of the world’s vascular plants belong to families that have symbiotic associations with mycorrhizal fungi.”

The mycorrhizal fungi increase nutrient uptake not only by increasing the surface absorbing root area but also by chemically dissolving phosphorus, iron, and other tightly bond soil nutrients. Due to the extensive network of mycelium, mycorrhizal plants also have a greater ability to take-up and store water than non-mycorrhizal plants decreasing drought stress.

Science has verified that when present, mycorrhizal fungi not only provide increased water, mineral, and nutrient uptake but also increase feeder root longevity by providing a biological deterrent to root infection by soil pathogens.

Tillage, fertilization, removal of top soil, erosion, site preparation, road and home construction, fumigation, invasion of non-native species, and leaving soils bare are some of the activities that can reduce or eliminate beneficial soil fungi.

Mycorrhizal fungi, either naturally occurring or artificially introduced, are capable of colonizing the roots of numerous trees, plants, and food crops. 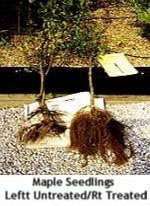 Successful treatment with artificial inoculants cannot be guaranteed since (1) the existing soil may already contain native mycorrhizal fungi that will out-compete the introduced mycorrhizas or (2) the soil organic matter content may not be adequate. The presence of organic matter is known to enhance the development of mycorrhizae.

Commercially produced mycorrhizal inoculant fungi for plants, trees, and food crops are on the rise. These inoculants have the fungal spores “enhanced” with root stimulants, fertilizers, humic acids, water absorbent gels, and other ingredients that are intended to invigorate roots and promote plant growth.

The debate, however, continues over the validity of applying these artificial mycorrhizal inoculants to the soil. There is very little, unbiased scientific evidence to confirm that mycorrhizal inoculation of plants actually improves their growth and survivability compared to non-inoculated species. The available evidence is rather inconsistent.

Either commercially prepared inoculants are not very viable or that they are not viable by the time they reach the consumer. Any short-term positive effects on plant growth might be attributed to the fertilizer components and other ingredients that are often present in the commercially available mycorrhizal inoculants.

Let us recap some of the recently published scientific research that examines the validity of claims made by some commercially produced inoculants.

I’ll be trying mycorrhizal inoculants this spring when I do my annual attempt at propagation. It may take several seasons to determine the results but I will report them to the GMG.

Research indicates that organic soil amendments, particularly the addition of composted mulches, greatly enhance the mycorrhizal status of landscape plants without the addition of artificial mycorrhizal inoculants. Other research suggests that the jury is still out.

If you already have a healthy soil, you probably don’t need inoculants. Improvements in soil conditions may really be the most important factor in mycorrhizal development in the landscape. To encourage your own mycorrhizas:

1 thought on “Mycorrhizal Inoculation: Does It Benefit Plant Growth?”