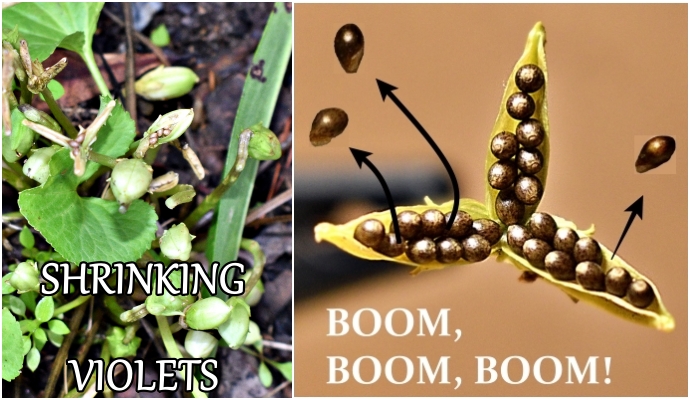 The poet that called the wood violet “shrinking violets” did not know how appropriate that name was for this little ground hugger. Yes, it is considered a modest flower in that it is small and close to the ground, but when its seed pods shrink, and they do, they go ballistic!

The seed pods shrink to release their seeds, but in doing so, the seeds are propelled to a distance away from the parent plant, a reproductive strategy. No worries about when the children will leave home; they are literally thrown out!

Violets have developed several strategies for survival. Thanks to bees, the pretty little purple flower you normally see can cross-pollinate, ensuring genetic diversity. But violets are a host plant for the fritillary butterfly. What if the caterpillars consume the entire above-ground plant? After all, the plants are small. The backup system of reproduction is underground cleistogamous or non-opening, self-pollinating flowers.

To disperse the seed even further after they have been shot out of the pod, the seeds have elaiosomes (fat bodies) which ants love! The ant grabs the seed like a trophy and carries it back to its nest, where the elaiosome is consumed. The still intact seed is discarded in the ant “trash” pile, effectively planting it!

I discovered the seed pods this week. I can’t resist collecting seeds from anything, so I picked some and brought them inside. After about ten to twelve minutes in the warm house air, I could hear them shooting off. I had to invert a jar over them to keep from having seeds all over the room.

This is a great botany activity for children. You can find them by looking for violet leaves, many of which are still green, then look for the seed pods next to them. Don’t pick them until you are ready to observe. The warm, dry air of your home will trigger a terrific little cannon display!